I thought this would be a good place to share some of my experiences with weather stations, software, purpose, installation, etc. These are in the order I purchased, installed, used and are not listed any order of preference. There are many different weather stations available online and you can spend as much or as little as you would like.

You will need to evaluate what your purpose is for having a weather station. IF it’s just a hobby and to check the temp every once and while, you can probably find one for a $100 or so. If you are heavy into research and doing more exotic things with your data, you can easily spend $500-2000 for a good weather station that will do about anything.

Never forget, you pay for what you get. Normally if you buy something cheap, it won’t last. Buy something that is more expensive and it will last and normally the support will be there on the backend. Choose wisely and within your budget of course.

First, I’ve had three different models. The first purchased in about 2002 was an Oregon Scientific WMR968 Wireless Solar Powered weather station. It worked ok but is discontinued. One major upside was it was wireless and ran from solar power. However, one of the downsides was the update cycle on the anemometer (wind gauge) was about every 30 seconds or so. A lot of wind can blow in 30 seconds.

A sidebar Your Honor– This first weather station was a Christmas gift from my wife. She didn’t pick it out or anything, but told me to go get one and this was a good starter model. For future reference, this is a great idea for a Christmas for a wx watcher or hobbyist. You can expect to spend somewhere around $100-1000 depending on what features are desired.

This is a gift that keeps on giving for years and provides real, live weather information including temp, rain amounts, dew point, etc. And with certain types of sensors, you can even have these check the temp of pool water, and soil moisture content.

With the included software, you can start collecting your own temps, rain amounts, etc., as I have done for about the past 12+ years. It is awesomeness and I could probably do a great deal more with it as others have done.

The second wx station is the one I use now. It is a Davis Weather Instruments Vantage Pro2. In about 2005, my dog decided to chew on two of the sensors on the original wx station and so it seemed like a good time for an upgrade. And knowing the update cycle for the anemometer was ‘slow’ on the older weather station, I chose something with a better update cycle. Yes, it was more expensive too but all in all, I have been happy with it.

A couple of notes about using this…

The third weather station I’ve had experience with was installed in October 2012 at work. This one was the Vantage Vue from Davis Instruments. This is an economical and solid weather station. Here are a few notes from the install and this one is atop a building in Birmingham. This is a solid unit. I like the design of it and so far, it seems to be working well. 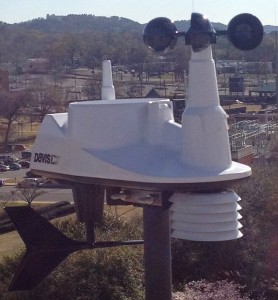 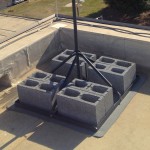 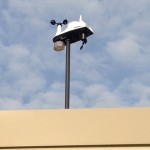 If you have any questions or comments about this, please reach out to me via Facebook and my weatherwalrus page there…https://www.facebook.com/weatherwalrus